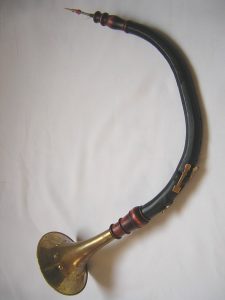 Come and join us for Bach Vespers on 26 June, at 6.30pm at the church of St Mary at Hill in the City of London. We will perform the cantata BWV 167, Ihr Menschen, rühmet Gottes Liebe. Bach wrote this fine cantata for the feast of St John the Baptist in 1723, and it is rarely performed today. It features a duet for soprano and alto with obbligato oboe da caccia. This is the first recorded use of the instrument, which had only recently been invented at the time. The oboe da caccia (pictured), with its curved leather-covered wooden body and flared brass bell, makes a unique and beautiful sound, which Bach exploits to poignant effect. The cantata finishes with an impressive choral fantasia setting. There will also be other vocal and instrumental music from Baroque Germany, performed on period instruments. Entrance is free, with a voluntary collection. Hope to see you there!

The following Bach Vespers will be on 31 July, with BWV 187. 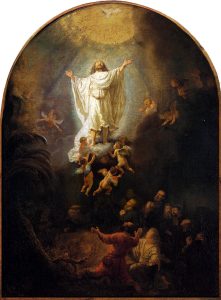 Come and join us for our first Bach Vespers since Easter, on 22 May. The service starts at 6.30pm in the church of St Mary at Hill in the City of London, hosted by St Anne’s Lutheran Church. We will perform Bach’s Cantata BWV 37, ‘Wer da gläubet und getauft wird’. This delightful work celebrates the Feast of the Ascension, and was Bach’s earliest composition for this subject. There will also be other vocal and instrumental music from the German baroque, performed on period instruments. Everyone is welcome (you don’t need to be religious), and admission is free, with a voluntary collection. We look forward to seeing you there and sharing Bach’s wonderful music with you! 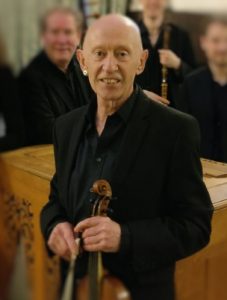 On 9 May the City Bach Collective will be taking part in a memorial concert for our much missed friend and colleague Philip Yeeles (pictured), who passed away at Christmas. The event takes place in the atmospheric space and beautiful acoustic of St Mary’s Old Church, Stoke Newington. Various groups and individual musicians who were closely associated with Philip will be performing, and we feel privileged to be taking part. Our contribution is J. S. Bach’s lovely Cantabile ma un poco adagio, BWV 120/ivR, which features oboe and strings, and J. C. Bach’s poignant ‘Mein Freund ist mein’, which sets a beautiful text from the Song of Songs over a chaconne bass. The event is invitation only for reasons of space (the venue will be packed), and guests are coming from all over the world to celebrate Philip’s memory. 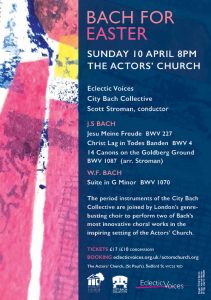 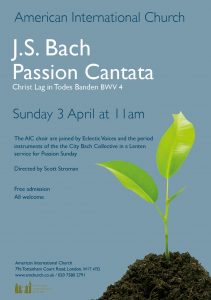 On 3 April the City Bach Collective instrumentalists join musical director Scott Stroman, the AIC choir and Eclectic Voices for a performance of the great seasonal cantata BWV 4, Christ lag in Todesbanden. This is part of a morning service at the American International Church in Tottenham Court Road, London, which begins at 11am. All are welcome and admission is free.