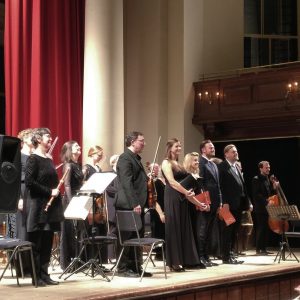 ‘Out of Conflict…the Peace’ is the broad title of this year’s annual Bachfest devised and presented by the London Bach Society. For all that this festival marks the anniversaries of both the Thirty Years War and the Armistice – and, perhaps, looks wryly at our current political relationship with Europe – this final concert was one of celebration. It is fifty years* since Paul Steinitz founded the London Bach Society [*thanks Margaret for a correction – actually 72 years, the LBS founded on 7 Nov 1946] and the concert celebrates the 50th anniversary of the ensemble that bears his name, the Steinitz Bach Players. Much of the credit for the longevity of the Society and its work may be taken by Margaret, Paul Steinitz’s widow, who has done so much to carry the Society’s torch and who welcomed us all at the interval.

Johann Sebastian’s Bach’s music is not simply indestructible, but alive. Like all great music it requires good, imaginative and invested performances to make it speak afresh. Tonight’s ensemble, directed by Rodolfo Richter, made a conspicuous commitment to find interest and argument in sound, phrasing and ensemble. The double concerto BWV 1043, in which Richter was partnered as soloist with Jane Gordon, was perhaps the sharpest case-in-point, with the marginally distinct tone colours of the two violinists making their dialogue all the more rhetorical, and the tutti rubato stretching and breathing like one. The subsequent Brandenburg concerto no. 1 BWV 1046 was presented as a tableaux painted in glorious, vivid colours, especially in the horns and Anthony Robson’s charismatic oboe.

The concert was bookended with a pair of sacred cantatas. BWVs 60 & 151 broadly move from Lutheran rumination (BWV 60 ends with the almost psychedelic funeral chorale Es ist genug) to celebration in the midst of Christmas. Again, the singers teased plenty of character from the music and text of their parts, and the whole was gilded with Rachel Beckett’s memorable obbligato flute in the opening aria of the second cantata.

On leaving the concert I walked past a London Bach Society banner, which bears the slogan ‘Onwards and Outwards’. The direct appeal of this music in a performance such as tonight’s puts purpose behind words such as these. We congratulate the Society on fifty years of performing J. S. Bach’s music and look forward to many more.