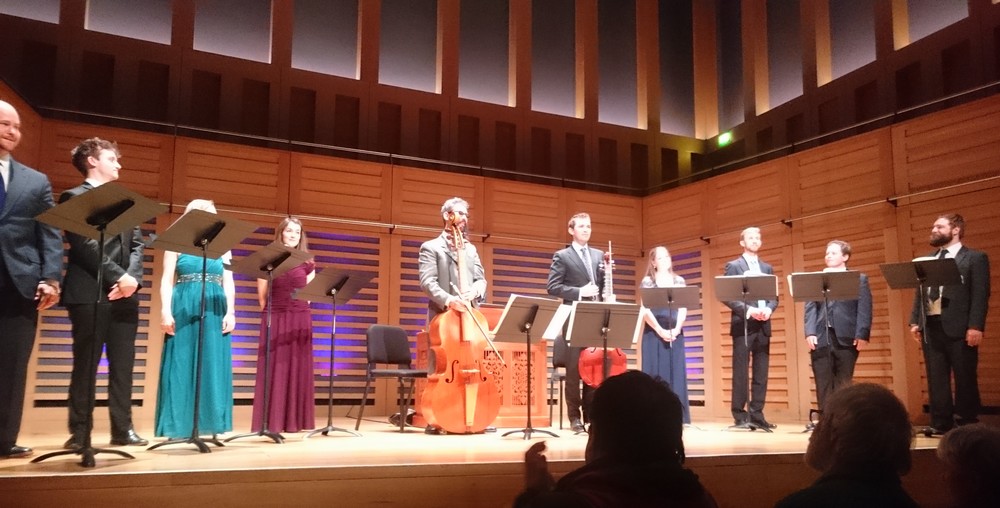 It was lovely to discover that our friends at Oxford Baroque were coming to London’s King’s Place to perform in the Baroque Unwrapped series. The group’s director David Lee had drawn together a programme called ‘A New Song: Bach and the German motet‘, featuring Singet dem Herrn, Jesu meine Freude and Lobet den Herrn (BWVs 225, 227 & 230) preceded by a number of other works by Walther, Schütz, Gabrieli, Hassler, Erbach, Roth, Calvisius & Jacob Handl.

Simply staged, the concert was given with the eight singers arranged either side of a continuo group (organ, violone and viola da gamba), with a certain amount of re-positioning between pieces. This antiphonal attention paid great dividends. The performance felt properly discursive not least as the group, operating without a dedicated conductor, often had their heads out of their scores to look (and smile!) at one another. The to-and-fro of the music was carried on a clear sense of style. I loved the clarity and finesse of the singing, particularly noteworthy in music high in the voice. Sopranos Emily Atkinson & Rachel Ambrose Evans are particularly praiseworthy here for keeping their sound woven into the top of the ensemble – as well as the stamina needed to singing at a calibrated dynamic in altitude throughout.

Such clear, sensibly-paced singing from everyone inevitably made for a true ensemble. This was most impressive in Singet, taken at terrific speed to begin with, but one that made lovely sense of the central aria and chorale. But the greatest benefit was in the second-half performance of Jesu, meine Freude. This occluded, intense performance took the group down to the basic five singers with the super decision to double the alto with Gavin Kibble’s gamba in the delicate Gute Nacht, O Wesen quartet. Beautiful.

Of the other works, JL Bach‘s Das ist meine Freude made the greatest impression with its detailed rhetoric (there’s a lot of effective space in this work). A terrific evening of re-visiting lively re-interpretation of old friends and discovering new, pertinent cousins (literally, in Johann Ludwig’s case!).